As a work experience employee for Transported, the opportunity to shadow a ‘Go-See’ visit in Sleaford was highly valued. The On your Doorstep scheme enables nominated areas to improve their overall appreciation of the arts, by working collaboratively with Transported and their partners to create culturally and historically inspired pieces of public art that resonate most highly with the community. Go-See visits are an established aspect of the On Your Doorstep process, as it allows those who are interested in partaking in the employment of public art to see previous projects and the impact they have produced. 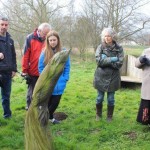 The Go-See visit held on the 18th of March in Sleaford started off at the National Centre for Craft and Design, a central hub for art in the community. There the Transported team met with individual representatives from RSPB Frampton Marsh, Crowland Parish Council, Boston Woods Trust and the Long Sutton Civic Society. Despite the unexceptional weather, everyone was eager to begin following the public arts trail, which was led by Nick Jones; the first pieces required us to walk around the town centre, where art was present everywhere. Comical murals on walls, personally designed benches and bike racks, larger than life iron structures and historically inspired floor tiles were all integrated art pieces that artsNK had worked on together with the Sleaford community, to promote the town’s most meaningful qualities. Everyone agreed that it was uplifting to see how these pieces had changed the town as a whole, and shaped a stronger community as a variety of the townspeople had been involved in the entire journey, the result being a visual body of work that they could be proud of.

The next destination on the trail was the Sleaford Leisure centre, the destination of a community mosaic, which began outside and travelled into the inside of the centre. Walking up to the Leisure centre, the group were presented with a steel ‘Mast and Sail’ sculpture by William Lasdun, which was situated in the river. Although some were concerned about the stability of the sculpture, they were reassured that questions like this were asked by the people of Sleaford, with the answer being that all pieces of public art are sure to be extremely safe and durable. Different mosaics were also spotted alongside the charming river bank, and soon enough, the cameras were out. The ‘Navigation’ mosaics which were inspired by the town’s labour revolution and reliance on the water passageways were quite stunning. As we reached the Leisure Centre, it was clear to see that the beautiful mosaic was achieved due to many hours of dedication from a range of abilities within the community. Many stated that a significant mosaic in their town or village would be a great step in creating a more artfully aware area.

The next stop was to the ‘Nettles’ –a once abandoned area that had been brought to life by ArtsNK and its partners. As one of the town’s more experimental projects, it allowed the visitors to see art that was temporary and could be adapted according to the town’s needs. With these experimental pieces the group could see first-hand that some of their developments could be more whimsical, and showed that they could ‘play’ with any free spaces that they have. A piece of practical art situated in the Nettles is the ‘Woven Willow Sculpture’ by Alison Walling, and is made up of a sequence of willow structures to support the damaged trees and protect the wildlife. A type of art that preserves the natural environment was popular among the group and raised issues in their individual areas that could be fixed by using public art.

An important subject was raised when the team arrived at the next destination, the Cogglesford Mill. A piece of art that was commissioned there became unmanageable, due to a misapprehension of what specifications the sculpture required. Nick explained, however, that a future plan was being put in place in order to keep the sculpture running. It was important that the group understood that adjustments are sometimes needed for public art, yet this task can be made much simpler with the help of the community.

The first public art commission in Sleaford was achieved through the help of the local schools, who artsNK are still working with now. The group were keen to work with a wide variety of people in their areas, as the positive outcome was undeniable.

Walking back to the NCCD, after viewing some more motivating public art, one of the group participants asked me ‘so what is the difference between art and craft?’. My reply was ‘craft is, I suppose, skills that you can learn and perfect. Whereas art is more about how you use those skills to provoke a reaction, or an opinion- it should show a journey and an end result that stimulates a specific group’. Although I am obviously not a professional in this subject, I think this is true for all the projects we saw in Sleaford and for the exciting things that are waiting for these willing areas in the future.